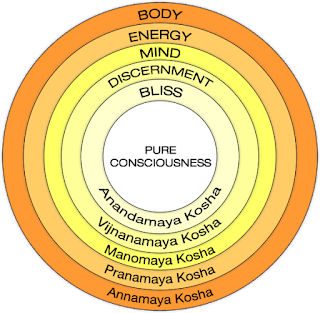 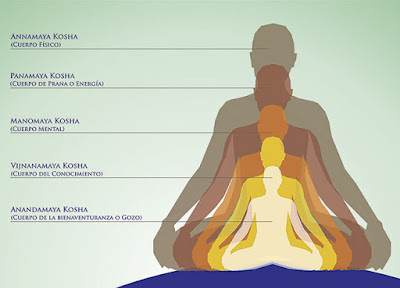 Just as the scabbard hides the sword, the outer shell covers the tamarind fruit, the coat covers the body, so also these five sheaths hide the Atman. Hence the significant name Kosha. Just as the Kosakar worm gets itself bound in its nest, so also the Jiva gets himself bound within the Koshas.

It is the innate tendency of the human mind to identify the Self with the five Koshas. This is due to ignorance (Avidya) only. This is due to Adhyasa or superimposition.

The ignorant man of dull intellect identifies the Self with the physical body. Others identify the Self or Atman with Prana, mind, intellect, or the Karana Sarira according to their various grades of intelligence.

All this illusion has arisen in men on account of ignorance and non-discrimination or absence of the faculty which discriminates between the eternal Atman and the illusory five sheaths which are falsely superimposed upon the Atman.

The power of discrimination (viveka)

A detailed knowledge and comprehensive understanding of the five sheaths is an indispensable requisite, if you want to attain Self-realisation and practise the 'Neti-neti' doctrine of Vedanta.

READ THE ANALYSIS OF KOSHAS HERE:
Atman is Distinct from the Pancha Koshas (five bodies) by Swami Sivananda

NOTE:
A student who treads the path of Truth (especially the path of Jnana yoga y Vedanta) must first equip himself with Sadhana Chatushtaya - the "four means of salvation".

Read the book:
Moksha Gita(.pdf) : an exhaustive treatise of the highest wisdom of the Advaita Vedanta.
A study of Moksha Gita alone is enough to guide a sincere aspirant in the path of Jnana-Yoga.
By practicing its teachings one gets liberated from all bondage and becomes Immortal
Posted by Atmaram at 12:21 PM

Thank you for your Donation!

If you find my videos and writings helpful you can support my work with a small donation via PAY PAL!

Perfection is attained when the intellect becomes as pure as the Atman itself!